Captive of the Darkness Book Blitz 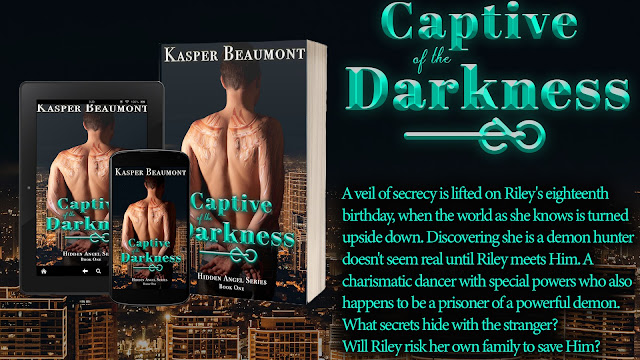 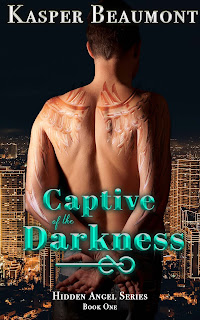 Title: Captive of the Darkness
Author: Kasper Beaumont
Amazon link: https://www.amazon.com/Captive-Darkness-Hidden-Angel-Book-ebook/dp/B081MW4D1P/
Release date: December 14th.  Preorder is now available.
In Kasper's own words:
On Riley’s 18th birthday, she is told she’s a demon hunter, like the rest of her family.  She shrugs the news off in disbelief but that very night she unwittingly enters the lair of a powerful demon and her whole world is turned upside down.
She meets a stripper nicknamed Cupid, who states he is prisoner of the demon.  He is a graceful ballet dancer forced into slavery but yearning to escape his dangerous master.  When she sees a glowing aura around this young man, she realizes he isn’t just any ordinary lad, but something very special.  She knows she must try to save him.
Blurb:
Can an angel be hiding here on Earth?

A veil of secrecy is lifted on Riley’s 18th birthday. She thought she knew the world, but now discovers she is a demon hunter. It doesn’t seem real, but then she meets Him, a charismatic young dancer with special powers.
He is a prisoner of a powerful demon.

What secrets does this stranger hide? Will Riley risk her own family to save Him?

Excerpt: Small sandy feet pounded the warm pavement along the beach.  His heartbeat thrummed in his ears, faster than he ever thought possible.  The whispering kept getting closer, no matter how far or fast he ran.  He swiped a cap from outside a shower cubicle.  It was rather large for his head, a perfect disguise.  This covered most of his blond hair and shaded his eyes.  He hoped to outwit whoever was chasing him.  Turning a corner, he dove into a shaded alleyway and bent over to catch his breath.  An aching side-stitch now caught his attention, winding him.  His hands trembled as they rested on shaking and weakened knees.  Turning his cap backwards, he held his breath and peeked a look around the corner.  There was no sign of pursuit.  He let his breath out and wiped the sweat cascading down his cheeks that had soaked his swim shirt.  Fear drove him on.  It was instinct, not a rational decision on his behalf.  Then all the hairs on his body stood up on end.  A cold shiver ran down his spine.  A shadow passed over him.  A whisper, quiet and close.  Warm breath could be felt on his neck.  He turned around slow.  His eyes widened as his hands grasped for the wall at his back.  There was nowhere left to run.  "Oh please no...” 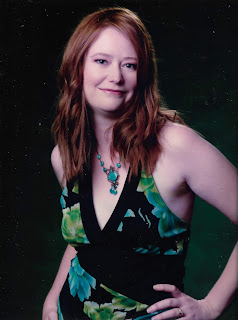 Kasper J. Beaumont was born and raised in Australia and lives a quiet life with the family in a seaside town. Combining a love of fantasy and a penchant for travel in the Hunters of Reloria trilogy, she started to write on the urging of friends and family and enjoys watching readers become immersed in the magical world of Reloria. Kasper is a pen name for a rather shy author who is happy to remain unnamed.
The Hidden Angel series is a urban paranormal fantasy involving Angels and Demons in the seemingly ordinary city of Brisbane. Riley discovers she's a demon hunter on her 18th birthday and enters a dangerous new world.
Book 1: Captive of the Captive, published 2019.
The Hunters of Reloria trilogy is about the magical world of Reloria where halflings and fairies share a lifelong bond. Dwarves, elves, knights and dragons inhabit this country, but their world is about to be invaded by scaly lizardmen and giant Cyclops.
Prequel: Fandri's Adventures, published 2016.
Book 1: Elven Jewel, published 2012.
Book 2: Hunters' Quest, published 2013
Book 3: Dragon's Revenge, published 2014.